Wings Over The Atlantic (and other stories) 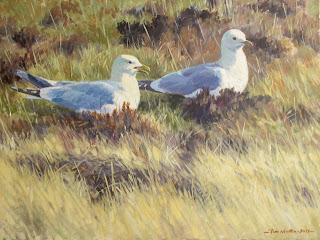 Common (Mew) Gulls - acrylics on canvas, 24"x18"
The past several weeks have been hectic, mainly due to my commitment to painting 20 new pieces for my show in Maine which opens mid-June.  Well this collection was finished, packed and shipped today and I can now take a break from show-painting and turn to a couple of commissions for the next few days . . . then it’s back to thinking about work for the up-coming exhibition in The Loft Gallery, St. Margaret’s Hope which is scheduled for July.  Here are a few of the completed works which are currently winging their way across the Atlantic; 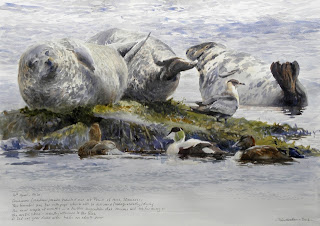 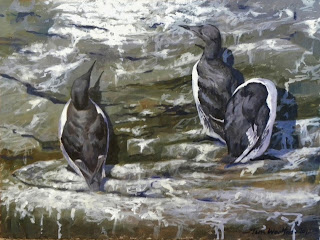 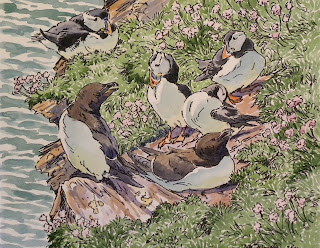 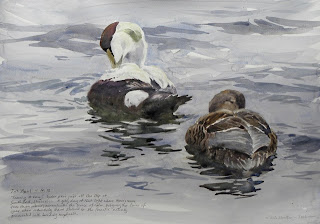 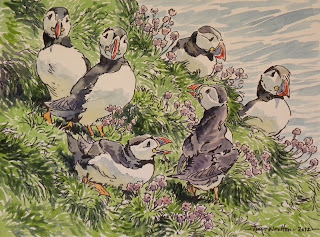 A Difference Of Opinion - Sharpie and wash 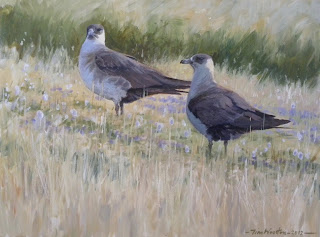 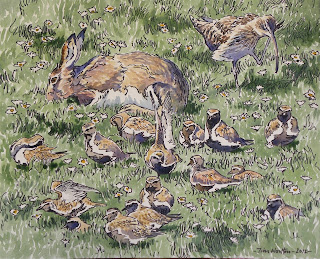 Golden Brown - Golden Plover and Brown Hare (Scratching Curlew) - Sharpie and wash
Meanwhile I was delighted to learn that my submission “20 Years Left; The Extinction of British Arctic Skua” was shortlisted for the prestigious (and valuable) ‘David Shepherd Wildlife Artist of the Year Award’ and has been sent to Yorkshire for forwarding on to the exhibition at The Mall Galleries, London.  This is an important piece for me and depicts a lone skua in pursuit of two arctic terns.
The skua is a klepto-parasite and relies on its ability to harass terns and kittiwakes into releasing their catch of sandeel.  Over the past decade or so, sandeel stocks around the Northern Isles have diminished to such an extent that the terns and subsequently the skuas have barely raised a fledged chick in over 10 years.  This piece attempts to describe the plight of both species; the terns are only carrying a 50% catch (actually quite a decent return in a recent context) and, even if the skua succeeds this time, the chances are the next bird it chases will not have any food – a waste of its own energy and a failure in its quest for nourishment for any offspring it may have.
I wanted to render the piece in monochrome as a statement about the bleakness of the situation as well as the harshness of the environment against which the scene is being played. 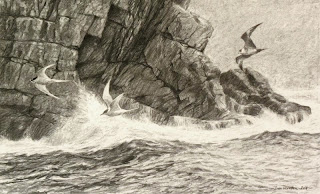 I’ve also just taken a few days doing bird surveys for a local environmental consultancy which will get me out and about a bit.  Makes certain I won’t be getting too bored any time soon . . . and it should get me close to a few birds . . . occasionally.