Gulp – doesn’t time just whizz by?!
Already halfway through 2009 and barely an update to the blog (sorely missed, I’ll bet) but, unlike previously when I had been trapped in the studio, this time is because I have been out-a-doors most of the time. My contract with RSPB was renewed just at the point when time was plentiful but cash was, as ever, in short supply. So the surveys start but almost simultaneously, we get the opportunity to take on the lease for a shop on the local high street (well, the only street, really!) and we then find ourselves having a full-time job each and in addition having to set up a new venture and provide stock for it.
So, many hours of painting slates, framing prints and nicking paintings off the walls at home and we open the shop. For one week.
Then we have to take a trip south to see mum (already scheduled) and manage to miss the most potentially lucrative week of the year; Easter.
Anyway – stuff happens and you just have to get on with it, don’t you?
Working for the RSPB this year is somewhat different as it entails plotting up on the North Isles for several days at a time. Luckily we have recently invested some of our overdraft in an aging motorhome (more of which elsewhere, at another time) which gives me the perfect base from which to work and also a haven to return to. It also functions perfectly as a mobile bird-sketching hide; something which added an extra reason for me fetching the van all the way from Glasgow one wintry night early this year.
Anyway the trip to see mum worked out well – particularly the return jaunt up the west coast; camping in the van at Loch Ness, Fort William and Ullapool (three highlights of many scenic eye-poppers). The Ullapool stop being spent at the campsite at Ardmair – a wonderfully evocative place, more so for me because it was here that I first ever came to Scotland – and fell in love with the place irrevocably. A few things had changed in the intervening 26 years (!) but the place still holds all the mystique and romance that I felt when a wee nipper. We saw an otter in the bay, too – another old friend from west coast trips. Talking of old friends, whilst at mum’s she ferreted out an old painting that I did many years ago (1987 to be precise, when I was 24 years old. Jeeps, I can’t even remember being 24 years old!). It’s of sanderlings and I know for a fact that I had only ever seen one before – and that at Broomhill Flash, Wombwell in South Yorkshire. Anyway, pride aside, here it is; 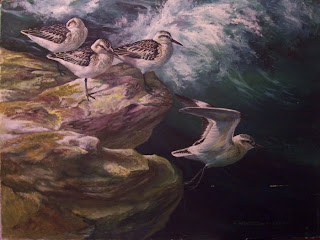 Back in Orkney and straight into the RSPB job. Always wonderful to get out to the isles, just occasionally being in the wrong place at the wrong time causes a lot of heartache. I’ve never seen a snowy owl in the wild and when one turned up in the county I was buzzing. But the bird (a young female) spent several weeks playing with my head; it was seen in two different locations not ten minutes from my home in Stromness several times over a period of four weeks, and each time I succeeded in missing the bird. It then turned up on the Island of Shapinsay – not only one of the islands I am working on as part of my contract, but also the island we lived on when we first moved to Orkney. And where was it seen, this be-speckled white northern beauty? Sitting on an old fencepost, in a field at the farm that I used to bloody-well own!!!! Talk about taking the Michael!
Eventually, however, I received a call. The call. Snowy owl showing well in a field in Holm (pronounced Ham, up here). Only 25 miles but starting to get dark and I know Sally’s not going to be happy with my suggestion that I abandon the kids’ bathtime, and the evening meal, erm, and her and go and look at a bloody bird!.
“Fine – just GO!” she suggested. “But if you don’t effing see the effing thing, don’t effing come back!!!” she quietly advised.
I exchange the Freelander for a teleporter and zap into the field within half an hour (don’t forget, not only does Orkney have no motorways, there isn’t even one metre of dual carriageway in the county, so travel can be a tad laborious at times). Not tonight though. And there’s the owl. But it’s not the little minx that’s been toying with my birdy emotions all the while; nope, it’s a pristine male bird, doing all he can to look like a white feed-bucket beside a square concrete strainer.
A very pleasant and most satisfying 45 minutes of drawing later and one happy chappie on the road back home. No dinner, I grant you; but fulfilled in every other sense. 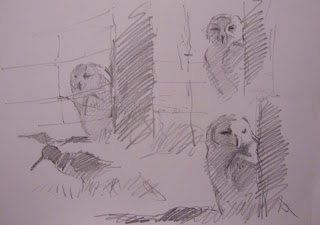 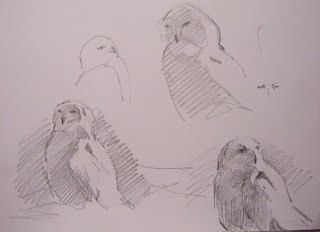 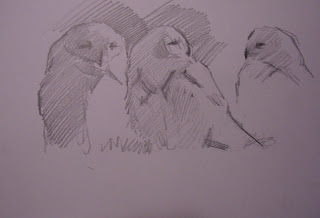 So, having got a ‘life-tick’, birding was bound to be straight forward from here-on in. Yes? Nope!
Just one more species was to send my dials spinning before the end of May – and this one was a really old friend; one that I saw only ever-so briefly 30 years ago, it standing in a ploughed field, 200 metres away from me, somewhere near Hoyland (I think – the memory is somewhat shaky).
I’m on the north isles – Shapinsay to be quite precise (yep – wrong time again) and the phone bleeps with a text ‘dotterel in South Ronaldsay’. ‘Jayzzusss Feckkkk-ittt’ I scream, frightening the curlews. By the time I’ve done the surveys and caught the boat back, these birds have long gone – probably mincing about on some upland tundra hilltop enjoying their curiously inverted summer nuptials.
I write them off, thinking I’ve done without them for thirty years, I can manage another thirty; no bother. I then ‘do the math’ as our Am. cuzzins say and image me-self at seventy-six, chasing a bunch of fancy plovers across a wheat field. Hmmm.
But, once again, the phone goes into sex-mode. Top birder and all round good-egg Paul (who runs the bird alert service in the county), knowing my personal plight with these birds has arranged for a small party of seven dotterel to conveniently land in an open field, right by the airport in Tankerness, and here he is giving me the tip-off.
What he’s unaware of, of course, is the fact that I’ve been out all morning and half the afternoon, wasting ‘quality-time’ and fecking-expensive fuel looking for – erm – dotterel.
Aaaarrrgghhh! I replace the handset very carefully, knowing I am in grave danger of ripping the whole communication device off the wall.
I glanced at darling wife whose face told something of a story, so I sulked for half an hour, at which point she told me to “Piss off and don’t come back!”.
Well, I thought, this an opportunity too good to miss and with her 'blessing' I sped off to the airport. No fecking sign - Brrastid! Quick call to Mr Higson who told me to go to the house with the washing (?!) I did and was there allowed wonderful access to their land and superb, if distant views of the birds.
I realise they are fairly settled, and are having difficulty leaving the site ‘cos of the wind, so I settle down for a session. I hear a cardoor slam and three very perky dotterel-spotters in high spirits tramp across to me 'Ssshhhhh!! - shut the duck-up' - I rather irritably snarl - but too late and the birds are offski. I sit jaw-clenched and white knuckled as apologies spill forth, but I decide to pack up, go the house to offer my thanks and phone Sal to see if I would be getting any dinner.
“They're back”, Ian has chased me to the car. I phone Sal back and plead for a little more time. Strangely the line goes dead. Hmmm, must be out of battery, I think - so go back to the dotterels for another hour and a half, during which time they’re harassed by a cock lapwing (who had a nest approximately four miles away); they attempt to continue their migration, but the wind just keeps blowing them back, so settled back down in the field. They were still there when I left at six o'clock.
I thought I'd better check if I still had a marriage to go home to. The jury's still out . . .

A few field drawings and a ‘finished’ piece from the same; 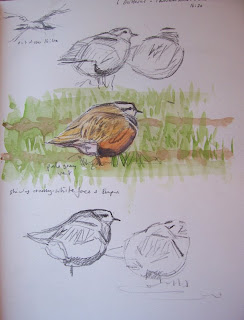 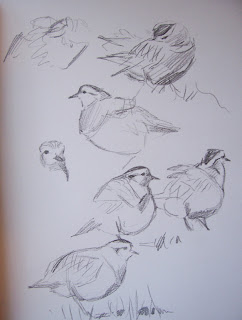 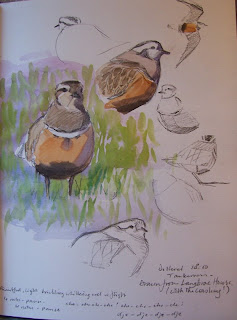 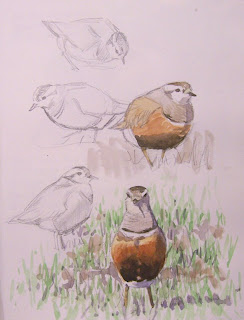 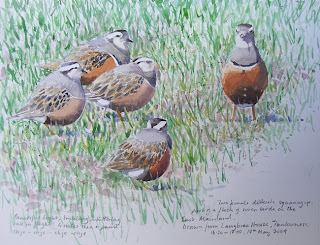 Some other stuff from ‘the field’ over the past few weeks; 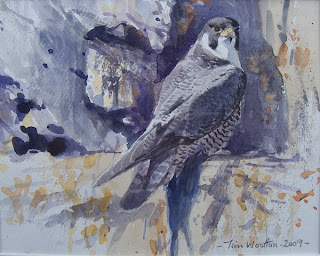 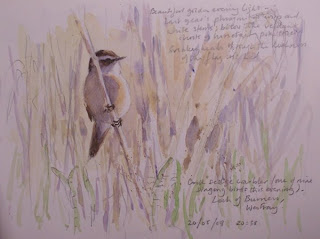 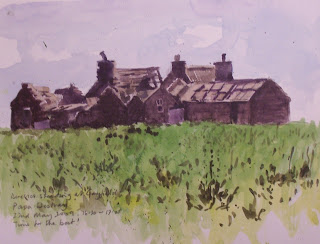 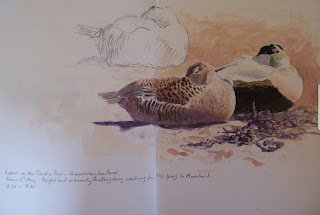 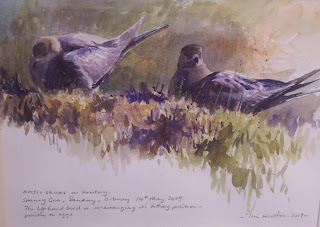