Some Effects of Light

Over the past couple of weeks I’ve been fascinated by trying to portray strong light and, as ever when the sun shines (and I’m allowed to sneak off on my own) I head off to the low cliffs around Skiba Geo; terns, fulmar and eider are plentiful. Visits to this part of West Mainland are usually timed to coincide with survey work I am doing this season, during which today I had 15 eider nests in a 50x50 metre quad, two of which were actually touching tails as they incubated! 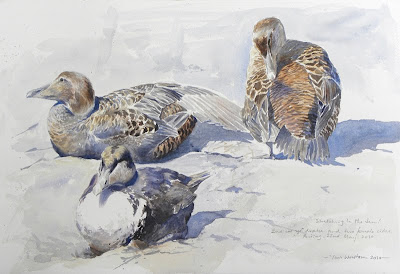 I’m interested in how light affects the subjects, not only by the direction from which it illuminates them, but also by the local atmosphere through which it travels. For instance, the first painting shows a group of three eiders seen from fairly close quarters (less than 30 metres) which are almost flood-lit, from directly above and from the left; the atmosphere is clear. The second piece shows a similar arrangement of birds but, besides being lit from above/behind, there is the sense that the atmosphere has a certain gravitas, formed by the relatively dense moisture content in the air and the distance from which the birds are seen. The quality of light in this second piece is very different from that in the first; having a solidity and weight (and maybe hue?) to it lacking in the first. 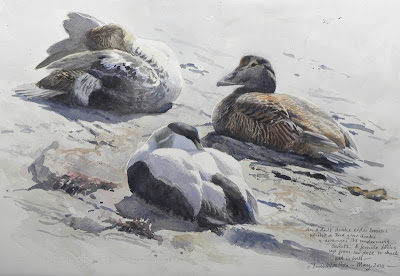 In the two arctic tern paintings, I am trying to deal with the light, but also with the incredible subtlety of these birds’ plumage. The greys are extremely changeable due to the angle of light and shade and almost shimmer as the birds move; very beautiful and challenging to paint. 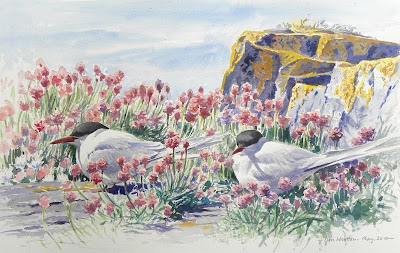 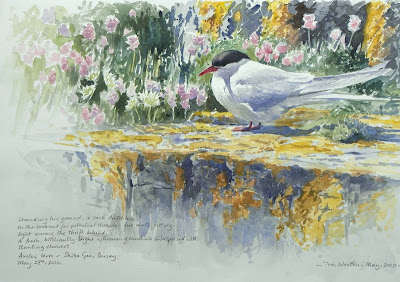 The last painting relies very much on the lessons from the previous pieces. I used field drawings and photographs in the making of this painting (as in all the above, too) and paid particular attention to the way the different textures and colours of the birds’ feathers reflected and/or absorbed light; how they integrated hues from their surrounds and expressed a variety of these and how the slabs of rock reacted to the strength of light. 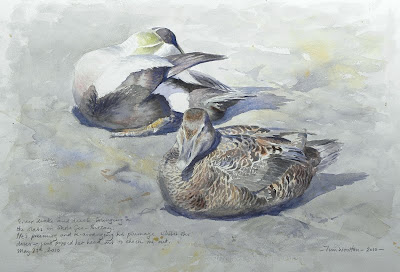 Being a wildlife artist is a fundamentally solitary occupation – birds are easily disturbed and working alone reduces the potential for spooking the subjects – so I enter a few competitions from time to time as a way of keeping in touch with the outside world, and to let others know what I’m up to.

Earlier in the month I heard that two of my paintings had been shortlisted for the “BBC Wildlife Magazine Wildlife Artist of the Year Award” and would I kindly take them down to Wiltshire for judging. This would have cost an absolute fortune, but fortunately my good friend Nick Derry also had two paintings shortlisted and his parents were taking those to the judging. They agreed to take mine, too. The only problem was, I didn’t actually have any of the paintings that were selected; I had sold them last year! So after begging them back from their rightful owners I sent them on to Nick’s parents who took them to the judging yesterday (Monday, 17th May).

Last night I found out I had won in my category of ‘World Birds’!!!!
Here are the two paintings which were selected; 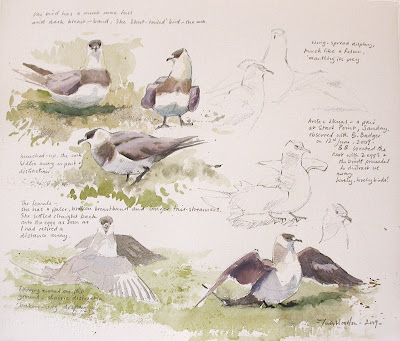 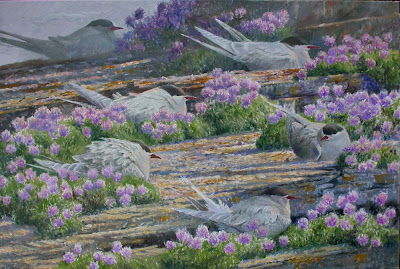 The glorious May has also continued to thrill on the birding front. The dotterels which I was sketching last week were still around into the weekend and I felt the urge to make a colourful composition of them with some wheatears, using my marker pen and colour wash style. I quite like the spontaneity this approach brings to the painting, but I can see it wouldn’t be everyone’s cuppa.
Then again, I’m not doing it for everyone – I’m doing it for me! 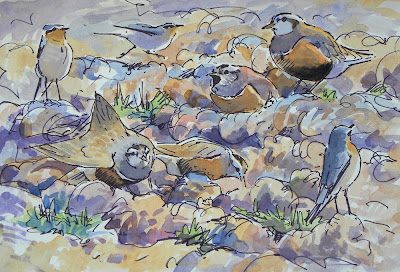 Following the long-staying dotterel came another splendidly exotic bird – hoopoe. This Mediterranean beauty found a pile of topsoil on a farm in Finstown to be just the ticket for the past few days and I spent a couple of hours making these drawings as the bird sifted through topsoil in search of beetles and grubs and then as it took forty-winks. 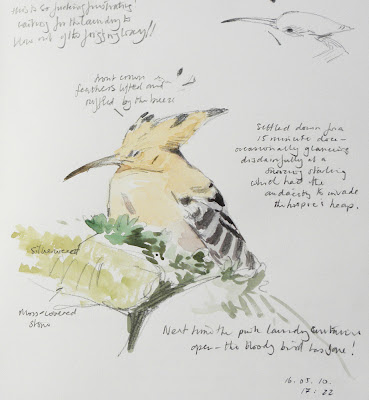 The past few months have been a blur with illustration work and commissions taking up a ridiculous chunk of my life, but from time to time I’ve allowed myself the indulgence of sneaking off to do some field study. Ducks come in many shapes and sizes but they are always challenging (and occasionally rewarding) to work from. An unprecedented number of pintails congregated at the Lock of Brockan during the early part of the year and, although very distant and quite wary, I managed a few sheets of drawings from my concealed vantage point in a low ditch 100 metres across the water. 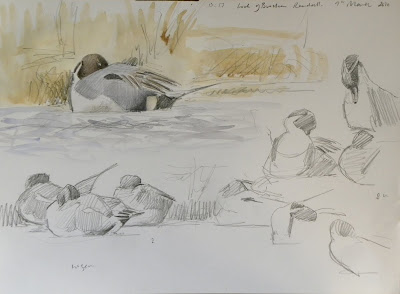 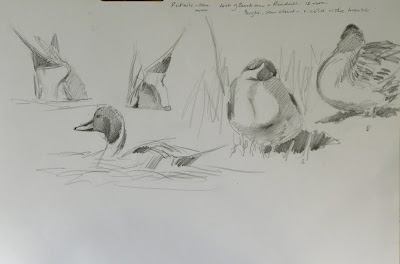 February also brought waxwings to Stromness; somewhat later than is usual for this Scandinavian visitor. The suggestion that their homelands were providing a glut of berries on which they feed, encouraging them to stay in the north for longer seemed logical and a small party of four adults and a juvenile finally arrived at a time when we could normally be expecting them to be making the return trip. For a few days they brightened up a grey and cold February – a couple even making it into my own garden; an exhilarating sight. This watercolour is of one of the adults in an ash tree. 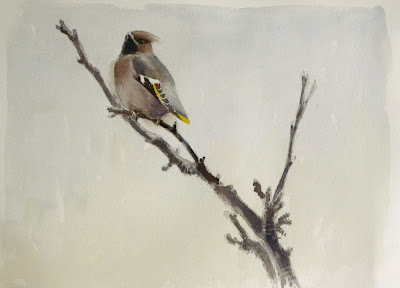 Two long-eared owls also decided that they would behave extremely co-operatively and showed beautifully in a bare-limbed sycamore tree in St Margaret’s Hope, South Ronaldsay. I made a few sheets of drawings and paintings on a freezing afternoon which culminated in this watercolour of one of the birds. It is destined to appear elsewhere at a later date (to be continued) . . . 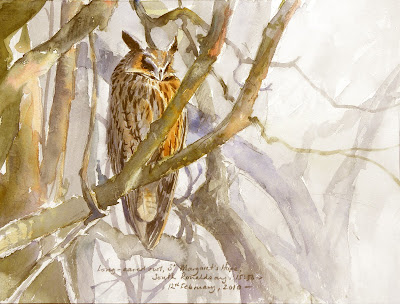 I also started working in a slightly different manner recently. To try and keep a stronger element of drawing in my colour work, I resorted to a black ink marker pen; a tool which makes lines so far removed from anything in nature that it renders the pursuit of ‘realism’ obsolete. This allows me to concentrate more on exploring the structure and character of the birds, their behaviour and interaction and the elements of pure design in the work. And, although all the birds in the pictures are based on direct observation and drawings from life, they take on a fresh and contrasting personality through this medium. 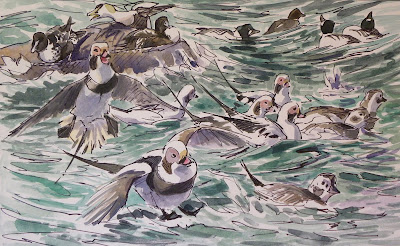 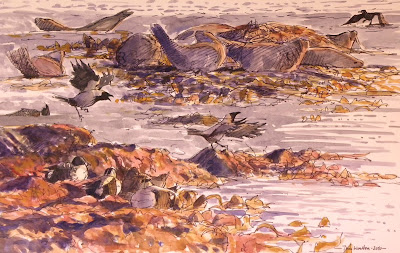 May – the most exciting month of the year! Long absent friends return to breed, a few special winter visitors linger on and every now and then there’s the odd VIP who decide to drop into the isles on their route further north.
Last year I finally managed to connect with very long-lost friends; dotterels and, checking the ‘Rare Bird Alert’ distribution map last week I noticed there was a healthy sprinkling of these diminutive and exotic waders throughout Britain. Calling all ‘Orkbirders’ to arms I felt there was a really good chance of getting this species again. Hmmm – except I forgot Sally and I were already destined to make a weekend trip south. While I was enjoying a luxurious whirlpool bath in the hotel room a text message beeps through on the mobile – ‘Dotterels in Tankerness – NOW!’

Oh Shagggitttt!!! – not-a-fecking-gain! I know how lucky I was last year in connecting with this, my second favourite species, and were it not for the highly organised Orkney Rare Bird Alerter Mr Paul Higson, I would never have seen the seven in Tankerness in May 2009, but here he is on my mobile giving me the best news at the worst time. Ah well, nothing I can do but enjoy the short break and try to ignore the weekend’s football results.

On my return to Orkney I immediately check on the status of dotterel. None around! Anyhow life must go on (apparently) so off to the gallery I trudged. Halfway through packing a couple of paintings, I get a phone-call from Eric Meek – Mr. RSPB; ‘Tim, I’m watching these dotterels now – they’re in Tankerness’. Oh baby, baby – I hastily flick the ‘Closed’ sign in the window, chuck the‘scope, bins, sketchbook and a St Christopher in the car and a license-risking drive across the county puts me smack in front of the perfect foursome – 2 males and 2 sparkling females. The drawings don’t do anything like justice – but they are a viable account of the afternoon. 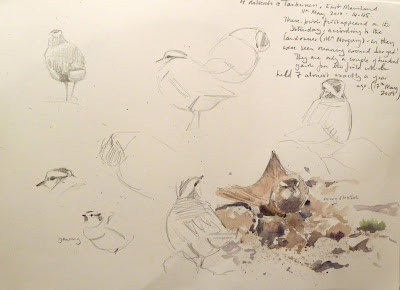 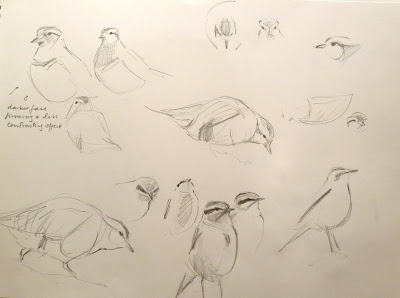 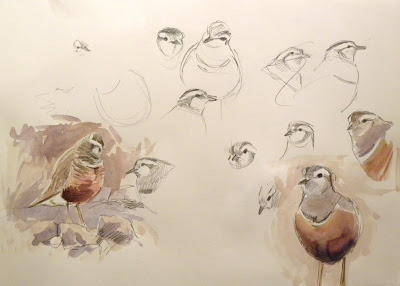