I'll be signing (and maybe even scribbling inside a few) copies of my new book "Drawing & Painting Birds" at Wildscape Gallery, Stromness this coming Saturday, 22nd Jan. Between 2 - 5pm. 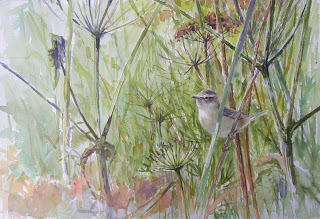 In typical marketing parlance; it will be first come first served - however if you want to avoid what would surely be immense disappontment, a cunning plan would be to buy the book from my blog and collect it on the Saturday (when you'll receive a refund for postage-paid).

The past few months have been somewhat hectic, to say the least. In September we bought a small cottage in the Parish of Evie in the North West Mainland. It was clear the place would need work – just how much work we were only to find out later on. The following months we had the house completely re-plumbed and a new heating system installed based around our new Rayburn stove. We re-wired too. An extension was designed and is in the process of being constructed at the moment. It has been and still is a slog, but we are gradually getting there. When finished the cottage will give us the interior space we need – just!

However the move isn’t really about the enclosed rooms, but the outside space and the vistas we are now lucky to have. We have two small fields bounded by dry stone dykes and a handy garden/paddock area – a couple of acres in total. The first day I spent at the cottage on my own, I was met on the drive by a very smart little bird – red-backed shrike! If ever there was a sign that this was the right place to be, then surely to be greeted by this tidy little predator (one of my favourite birds) was it. I spent an hour or so watching the bird fly around our property, catching bees and being scolded by the local house sparrows and robins.

The drawings are an account of a few moments of magic on a gloriously warm and satisfying day. 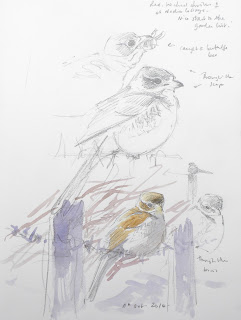 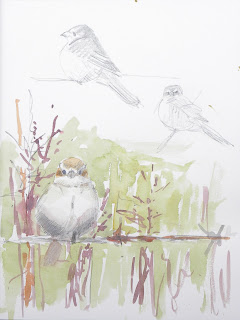 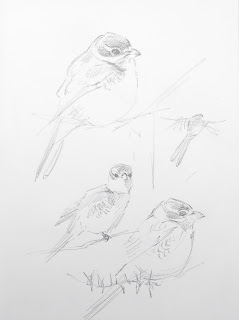 The next month saw the season turn and with it an extremely early invasion from the north. Following the hundreds of siskins which flooded through the county were the Bohemians. Waxwings are eagerly anticipated in early winter and one bleak and dank morning I went seeking them out. Well, to be accurate, they came seeking me out. A morning dog-walk past the Fire-station was suddenly punctuated by the tinkling sound of waxwings. They swept in and over my head to settle in a sycamore 30 metres away – 37 of them. Taking the dog home I returned with camera and sketchbook and spent another hour trying to relocate them. But when I did, it was worth the effort. Trudging up Hillside Road in Stromness, I happened upon a bunch of birds murdering a cotoneaster hedge. A quick count revealed about 70 birds. I followed them up the road for a few minutes and then, as I waited and watched, a swarm of birds came from behind me, swamping the trees and shrubbery all around me – 300 pinky grey jewels, scoffing Rosa rugosa hips and whitebeam berries. I have never seen so many together – the image will stay with me for a long time.

An idea for a painting formulated but it was many weeks later that I finally brought the drawings together and made a few compositional sketches (blame the house renovations!!). The painting “Bohemians Among the Branches” recollects that moment as hundreds of birds filled the air and surrounding trees – a small satellite group of birds taking a wee break from gorging, assessing the immediate locale and preparing for the next foray into the gardens. 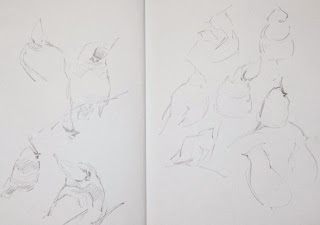 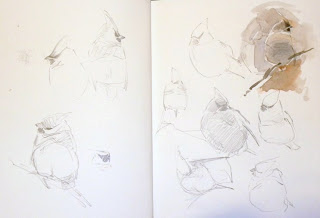 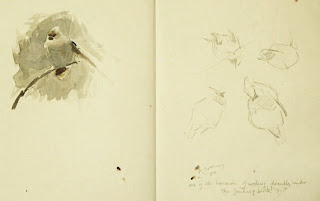 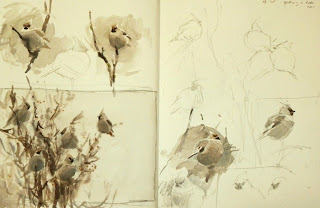 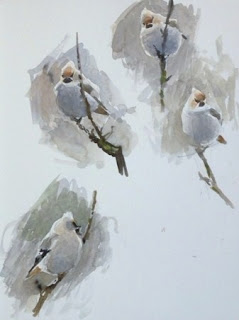 Bohemians Among the Branches
Acrylic on canvas, 24"x18" 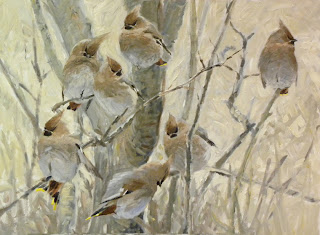