The year seems to be rushing to a close at an incredible rate. Just a couple of weeks ago I was recounting some of the summertime events – now I find myself grateful for the brightly glowing coals in the open fire, whilst starting to reflect on the year - and the year’s birds.
Orkney is a pretty small collection of rocks situated off the North coast of Scotland but we are graced with some of the most fantastic landscapes and open-sea vistas. And because of our geographical location, erroneously migrant birds regularly find themselves castaway on our not-so deserted islands and, although we have only a score or so regularly active birdwatchers, we also have recently developed a rather effective networking system linking sightings and locations. Anyone with access to the internet can receive an alert whenever rare or unusual species are located. This means two things; folk interested in birds get to know what’s about and where and ‘finders’ have an efficient way to tell others of their success. It breeds a kind of self-propelling birding euphoria. 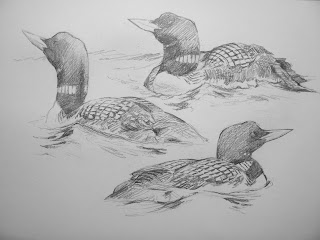 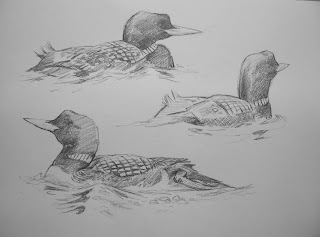 We have had some really notable birds throughout the year, including a superb white-billed (yellow-billed) diver which, not only has spent the whole summer here, but also appears to be settling down for the winter, too! Rustic and Cretschzmar’s Buntings; rare pipits, warblers and wagtails; and a smattering of gulls and waders. I also found a splendid dark-phase honey buzzard. 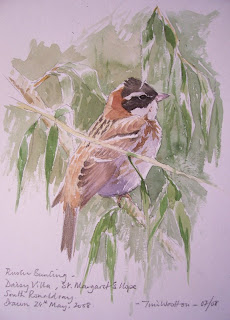 But the birds which really caused a stir throughout the county were the waxwings. Certainly not rare, but they are very charismatic these little visitors come from the north. It appears they have had a decent breeding season in Scandinavia and hundreds of these pinky-grey bohemians have descended on and percolated through the British Isles. My first encounter was when a flock of eighteen birds came off the sea and into Stromness, almost taking my head off in the process, their high-pitched ringing-trill calls notifying me of their approach seconds before I saw them. A couple of dozen stayed for a few weeks and their confiding nature meant that I could make close-up field studies, often without the aid of binoculars. 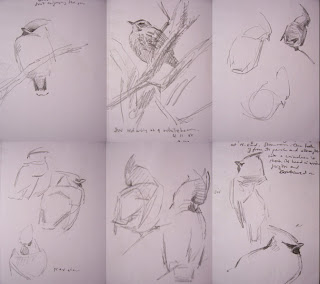 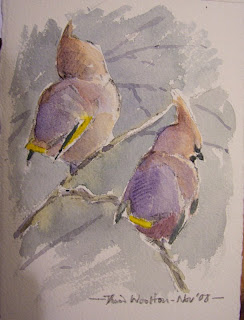 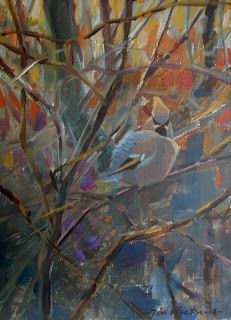 Another uncommon visitor also turned up within a stone’s-throw of my house. A breathless phone-call alerted me to the whereabouts of this nocturnal hunter, snoozing away the last of the daylight in an ancient sycamore just fifty yards from my doorstep. A swift scan of the lower trunk revealed the bird, cryptically marked though it was. Although the last time I saw one of these was several years ago at Denaby Ings, South Yorkshire, the first thing I did having located the bird was set off back down the path to the house to collect Sally and the Nikon scope. Sal doesn’t waste much time bird-watching (unlike some in the family) but she is fanatical about owls, and this is one species she’s never seen – long-eared owl. We stayed and watched the owl, me making a few thumbnail sketches in the near-dark, until the bird had finally had enough and departed its roost for the nocturnal hunt.
Although the bird didn’t return to the same tree the day after, I managed to relocate it in a small copse just a couple of hundred metres further east. Over the next few days I had several memorable encounters with this terrific bird and had the opportunity to make some drawings of it. This series of sketches culminated in a small and expressive painting, inspired not only by my experiences with the bird, but also because it happened to be Sally’s birthday and, as usual, I had to rely on my last-minute ingenuity rather than conscientious forward planning to get me out of potentially hot water! 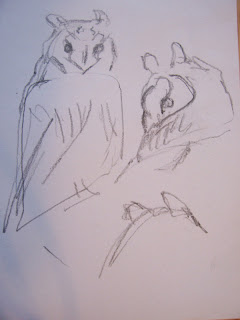 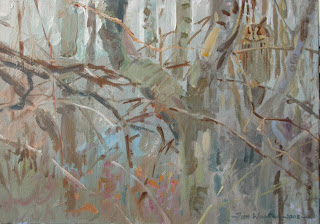 The realisation that winter is really upon us was finally compounded this week with several inches of snow falling and, in places, staying for a day or two. Purple sandpipers are scuttling along the foreshore in company with starlings (surely waders in disguise) and turnstones. The resident eiders have recently been joined by the long-tailed ducks, having returned from Arctic places of reproduction, and are frolicking around the bays of our Isles; male red-breasted mergansers are bobbing to each other and their mates and goldeneye drakes blurrily shine turquoise-white as they dive in the cold, clear waters around our pier. A first winter Iceland gull appears to be just as at home at the harbour as it was in Greenland, where it was hatched as a chick less than 20 weeks ago. This northern youngster also looks to have settled into this new habitat just as well as the white-billed diver did at the beginning of the year. 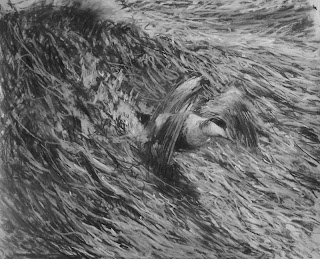