Stuck In The Studio - No Bad Thing!

I haven’t had much time to get out and draw over the past month or so. The adverse weather combined with the extreme dearth of daylight hours has meant that any artistic endeavours have been studio-based. Fortunately I don’t have to go far to find inspiration as our house is a waterfront property with red-breasted merganser, eiders, shags and gulls swimming past the kitchen door.

And the weather is always interesting. Our property, like many in Stromness, has flooded in the past. When there is a combination of extreme weather conditions; high tide, low barometric pressure and a strong south-easterly blow amalgamate to push water into the Haven where it has nowhere else to go. The water rises and the breakers come rolling in. These are tense times and we watch both the sea and the clock to check when we are highest risk and the subsiding tide and/or a reduction in wind strength are greeted thankfully. Most of the time though, we can just enjoy the natural spectacle of wind whipping whitecaps of spray and foam onto greeny-grey peaks of saltwater; the gulls hanging and driving against the force of the air, the waterbirds seemingly oblivious to the incongruity of the climate.

Two of my best friends have been pontificating over what should adorn their newly refurbished living room wall and, having finally made a decision, I was summoned to the ‘Old Island’ of South Ronaldsay to discuss a panting and take some photographs. A favourite place is Harrabrough Head and I make my way across the fields to the clifftop. I was amazed to find over a thousand fulmar already on the cliffs and pairing off – this is the first time I’ve seen fulmar here this early, although in the Western Isles they are known as Christmas Gulls because of their propensity to return to the breeding cliffs early. It was a gorgeous day, a stiff breeze as sharp as a knife coming off Scapa Flow and a light of Narnian brightness. The walk along the cliffs to The Cathedral served to remind me of why I moved to this remote part of the British Isles and my quick snaps for landscape reference were adequate for the job.
All over Christmas and into the New Year I worked on the large canvas and finally delivered the painting to Terry & Ingrid just a day before he was due back at sea fishing the waters around Rockall, Iceland and Shetland. 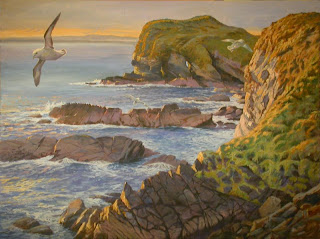 I have been invited to contribute to a Wildlife & Sporting exhibition at The Jerram Gallery, Dorset so a few ideas for paintings which had been lying dormant for a while have had a bit of life breathed into them. One in particular was a divergence from my usual work which, since I moved to Orkney at the beginning of the millennium, has been almost entirely based on encounters with nature up here. In our previous lives, Sally and I had the run of a tenanted 30 acre smallholding and one of our favourite aspects of the property was the moor; an area of rough upland pasture, giving way to banks of fragrant gorse then birch, oak, sycamore woodland where chicken-of-the-woods grows. There are badgers, three species of deer and, of course, foxes.
With the painting “A Heavy Fall: Red Fox” I was confronted with the problem of harmonising an essentially warm-coloured subject (the fox) with the predominantly cool hues of the snowscape background. I also wanted to create a sense of silence and stillness within the painting. There are in fact very few rufus tones in the fox’s coat; the effect being created through contrast between the grey-blue background. 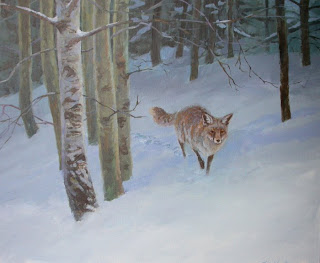 I have also been asked to make a couple of sheets of sketches for a client in Holland. These are always fun to do and they allow me to go, through my imagination, back to the woodlands of Yorkshire where I was brought up. 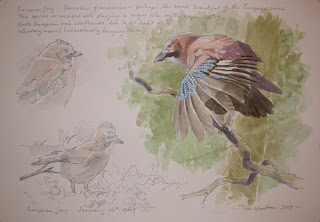 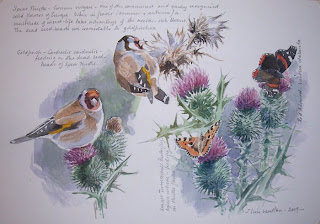 The long-eared owl drawings have also been re-visited and I decided to make a larger, more involved painting. I was particularly interested in making simple marks on the canvas and not getting bogged down in superfluous detail. The resulting painting is a study in concealment. I have made no attempt to hide the owl, per se, but have tried to use the owl’s natural cryptic plumage to resist an immediate reveal. 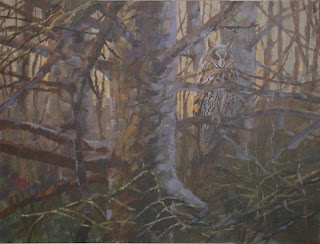 But back closer to home for the next three pieces.
The shelduck painting is one which I thought I had completed in 2008 but I realised there were certain issues which I felt I had to iron out before exhibiting the piece. I’m fairly happy that the painting works ok now.
Eiders are fabulous birds and I’m lucky to see these from the house on a daily basis. We have just had to endure another bout of winter storms and keeping our 200 year old house warm is expensive, but the effect this weather has on the artist’s psyche is immeasurable. I’m constantly inspired to try and capture something of the power and awe these winter storms have as well as showing how wonderfully adapted the birds which live in this habitat are. 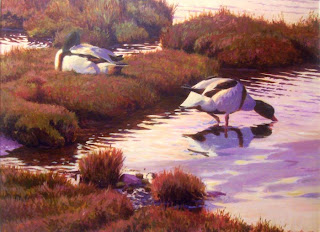 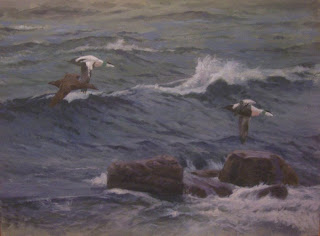 The fulmar painting follows a similar theme. A fresh, face-stinging morning walk with the dog leaves my ears ringing and my finger-ends throbbing with the returning blood, but I am straight onto a canvas and the basic colours are blocked in within minutes. The whole process of making the painting takes a couple of days, but the sensation of being on the ocean with them is easy for me to recreate in my own mind’s eye - I just open the kitchen door and take a buffeting walk on the pier. 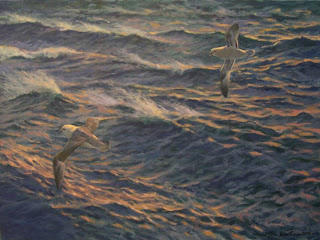