From The Field to The Studio 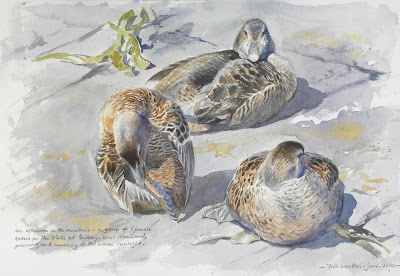 I spent some time during June continuing the theme of light as a mood and not merely a way of illuminating a painting. The members of the local eider population are accessible and compliant models for drawing and painting and also photographing; they are powerful in structure yet soft in plumage and offer much for the artist to contemplate. The auks – guillemots, razorbills and puffins – have similar characteristics with the added complexity of highlighted darks and shadowed whites.
"The Ledge" is a painting involving interaction on the cliffs and deals with highlight and shadows falling on disparate hues and textures. 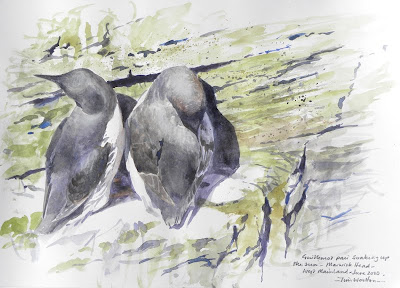 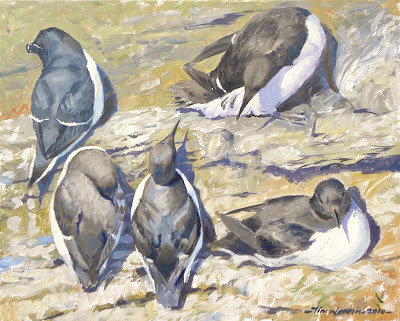 There is always a dichotomy regarding the depiction of puffins; the well-known clown of the cliffs and the fierce little predator living life on the edge. Of course the puffin knows nothing of these labels and characterisations – it is what it is and it does what it does. This puffin painting is an attempt to de-anthropomorphise this species and to see them in terms of design and composition. 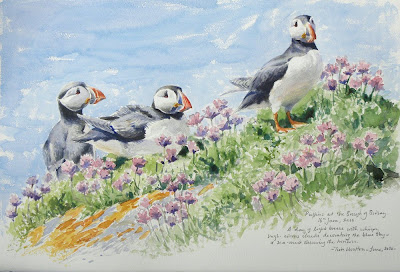 Living in Orkney, I’m never far from awesome and inspirational land and seascapes. In certain weather conditions however, the urge to work plein air is curtailed by the knowledge that a force 8 could see paper, paints and artist taking to the air and, ultimately, to the sea. The camera was invented for such conditions . . . 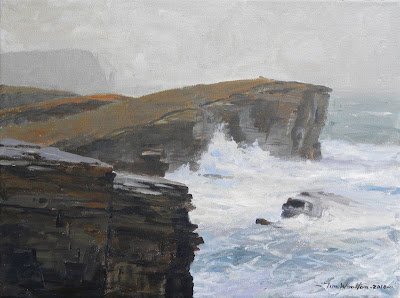 Interpretation of one’s photographs is as much a challenge of mood-setting as that of value and hue application. 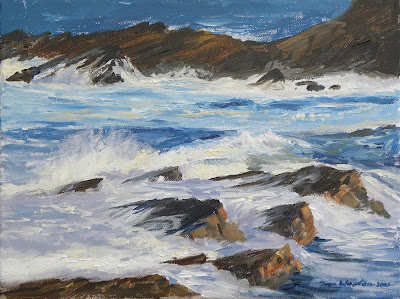 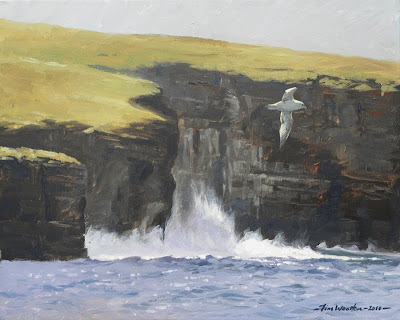 Once again bird-survey work has been a major occupation this spring and has eaten into a lot of available sketching and painting time. It does, however, ensure that I get out into the field in all weathers and at the extremes of the day. This brings me into contact with various birds in different light and weather and each bring unique stimuli to the painter of the natural world.
This common sandpiper was calling in alarm as I entered his water-margin territory on the Loch of Swannay in the north-west Mainland during a daytime survey of the loch. His melodious calls echoed around the locale and were dueted by those from his mate who stood-off a short distance away on a low dyke. The mare’s tails are just emerging and create a low pre-historic forest through which I see him. 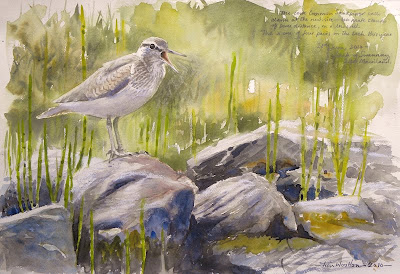 One evening I punctuated my surveys in Birsay and detoured to the Burgar Hill moorland nature reserve where a pair of red-throated divers had a nest. As I stopped the car I noticed a ringed-plover scuttling around and he was quickly joined by his mate. Like tiny clockwork toys, they ran, stopped, ran across the stony and bleak ground. The rain and overcast sky brought a certain harmony to the scene; muting and merging the colours. 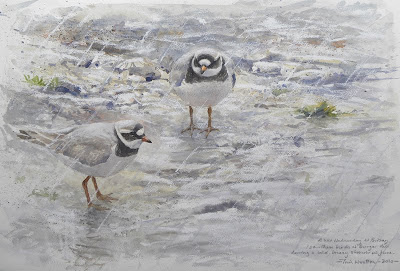 nd then there are those moments of fortune. Already booked on the ferry for my only off-Mainland surveys, I get news of a red-necked phalarope on a tiny marsh. Once surveys were out of the way, I ventured towards Ness, the north tip of Shapinsay where a deeply scoured tractor track leads to a typha-fringed pond and almost immediately I spot the diminutive wader swimming across the water, picking at insects and other morsels on the meniscus. From time to time the skittish nature of the mainly juvenile redshanks forces them airborne and the phalarope joins them, more out of politeness than fear. It is the first bird back on the lochan and resumes his business long before the larger birds drop back out of the sky. This painting is a recollected scene during that afternoon; the male red-necked phalarope scooting his way across the water whilst a juvenile redshank ignores him completely. 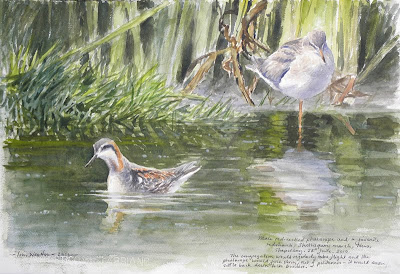