I’m bang in the middle of working towards the opening of my new exhibition at the Scottish Seabird Centre, North Berwick. The Private View is Thursday 13th October. If anyone would like tickets please contact me directly or the Seabird Centre;

Although I have a fallback position of a few favourite pieces, I intend to be showing an entirely new collection of 35 original works – fingers crossed! Below is a new painting completed this week; 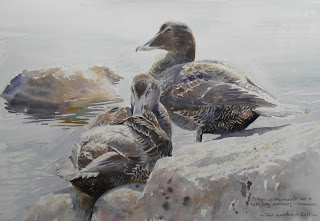 ‘Moulting Eiders’, watercolour, 22”x15”
I look forward to seeing some of you there!!!
Posted by timwootton at 11:29 13 comments: Links to this post 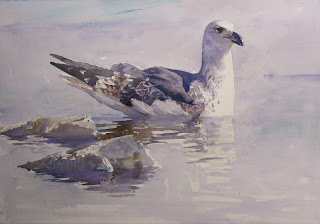 That time of year . . . again! Breeding season is rolling up its towel and trudging off to the bar and birds which have bred at more northerly latitudes are already spilling down through the continent on their southern break. It’s yet to really get going here in Orkney although the extreme northern isles have had extraordinary numbers of wrynecks and rosefinches with a couple of super-nice ‘biggies’ such as great snipe and Fea’s petrel. Lapland buntings are appearing in small numbers too – maybe heralding another enormous influx of this fine little passerine. 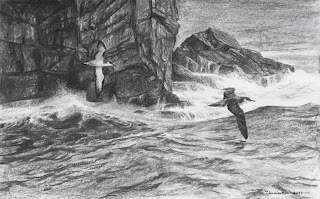 With my SWLA submissions already packed and sent I have now to address the fact that I will be hanging a major one-man exhibition at The Scottish Seabird Centre in North Berwick which will open in the middle of next month. Over thirty original and brand new pieces are scheduled and I think I’m now painting some interesting pieces in readiness for the show. 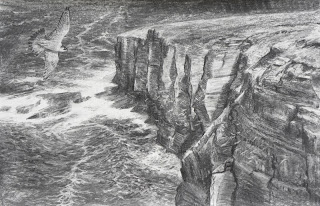 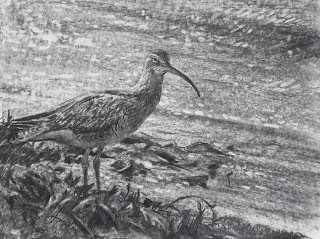 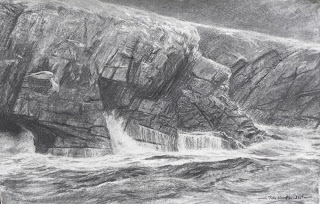 In recent years I’ve found that I tend to gravitate towards monochrome, specifically charcoal, at this time of year – to leave entirely alone as a medium for perhaps the other eleven months. The change in the season manifests itself in big seas and dramatic cliffscapes, subjects ideally suited to this approach. In fact, when considering these charcoal paintings it would be difficult to see how they would be enhanced with the application of colour as they depict scenes of rock and foam, swell and spume; all fundamentally about value and key and relating less to hue.
This session however I’ve also detoured somewhat and allowed the indulgence of a few portraits too. 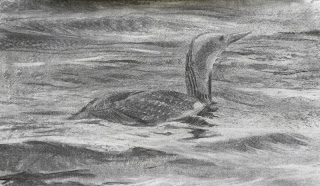 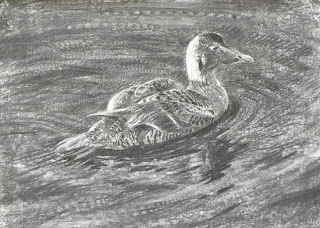 The sketchbooks are becoming increasingly important to me and the way I work; fleeting moments scribbled in pencil or watercolour on long, warm afternoons on the heathery tops have an added resonance at this time of year. Delineated forms are one thing but more so are the notes and washes of colour which help to flick the switch when remote from the moment and he subject. I’m resolving issues of colour and form by direct reference to the field studies than ever I did previously. 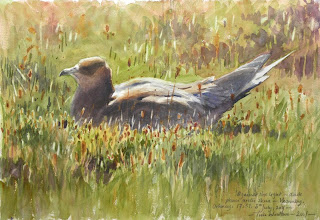 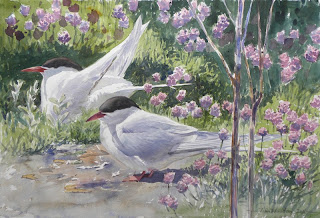 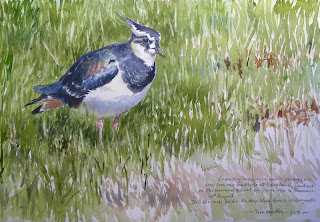 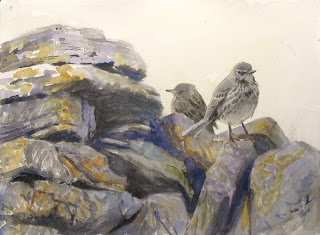 Through these periods of stylistic chop and change, the Sharpie remains constant. I use the pen often for scribbling ideas and processing thoughts on colour in the studio and intend to make several finished Sharpie paintings for the upcoming show. I imagine this one (or a version of it) will get wall-space at some point. 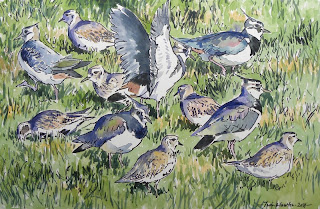 I’ll post updates about the exhibition dates and times very shortly.
Posted by timwootton at 15:38 6 comments: Links to this post